Recently at work, we decided to build a CI/CD pipeline that deploys our application directly to AWS. I had never worked with AWS, and it was a missing point on my CV which demonstrates that I have some DevOps skills. I decided to search for some tutorials online and I was not lucky to get what we needed at work. I decided to write this guide by getting something working from various tutorials I found online.

What you will learn from this series.

Who is this series for ?

This tutorial is for developers who are familiar with docker and have an application with docker-compose. Although the series was written by a Python developer and using Python, the concepts can be applied to other programming languages.

Which application will we deploy?

In this tutorial, we will deploy a Python application that has a celery worker, a celery scheduler, and a Redis database for task messaging and task queues.

I will not talk about celery and task queues and how to use those tools but you can get start with them here, and to get started with docker you can use this one ,and this one to be familiar with docker-compose.

This series is not based on any popular Python web framework such as Django, Flask, or FastAPi but you can adapt this tutorial to them and I am sure it will work like a charm.

The application skeleton can be downloaded from this link to get started.

In this first part of the tutorial, we will learn how to create the Cloudformation stack.

What is AWS CloudFormation?

From the official documentation, Cloudformation is defined as :

Make sure that you have created an AWS account and you have your credentials; the access key, and the application secret key.

Most of the services used in this tutorial are available within an AWS free tier.

We will deploy our application using the AWS ECS Fargate launch type which will pull docker images from the Elastic Container Registry aka ECR.

Why Fargate and not EC2?

AWS provides us basically two launch types which are the Fargate launch type and the EC2.

Amazon Elastic Compute Cloud (Amazon EC2) provides scalable computing capacity in the Amazon Web Services (AWS) Cloud. Using Amazon EC2 eliminates the need to invest in hardware upfront, so you can develop and deploy applications faster. You can use Amazon EC2 to launch as many or as few virtual servers as you need. It allows you to configure security and networking, and manage storage yourself. With EC2 you don’t have to worry about the hardware, the hardware is managed by AWS.

AWS Fargate is a technology that you can use with Amazon ECS to run containers without having to manage servers or clusters of Amazon EC2 instances. The advantage of Fargate over EC2 is the fact that you don’t have to configure, provision, or scale cluster instances and don’t have to worry about the virtual machines.

With a virtual machine, someone still has to manage the hardware, but with EC2 that someone is AWS and you never even see the hardware.

With ECS on EC2, someone still has to manage the instances, but with ECS on Fargate that someone is AWS and you never even see the EC2 instances.

The objects we need :

To deploy the application we need the following objects: a cluster, a service, a task definition with containers definition, cloud watch for logging, and IAM roles. The below picture illustrates how those AWS objects interact with each other. 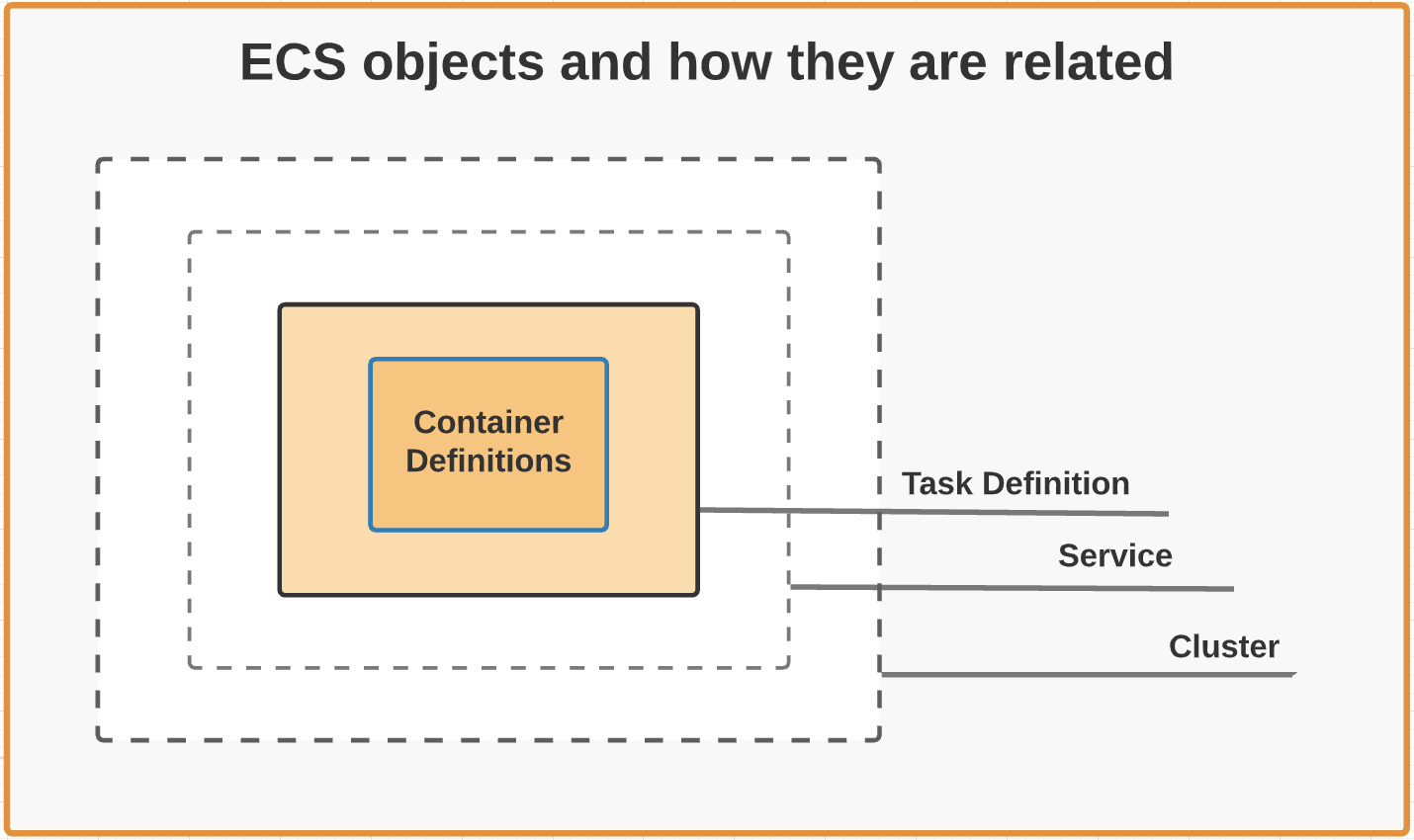 Let us define some of those objects and then we will investigate how to create a stack, containing them, using Python cdk.

With all the objects described, we can now learn how to create them using the Python CDK.

To build the infrastructure, we will leverage the AWS Cloud Development Kit (CDK). If you are new to CDK, see Getting Started with AWS CDK, it is simple and straightforward to install. In this post, we will be using the CDK with Python 3.7. Another alternative to the CDK is to create the application via the AWS console. However, I found the CDK to be the simplest approach because it allows you to have control over the code you are writing.

After installing the CDK check if it is working with the following command:

Make sure you have AWS CLI installed on your computer. Configure your AWS CLI with an IAM user that has permissions to create the resources (VPC, ECS, ECR, IAM Role) described in the template below. After the configuration you should have the AWS keys stored in your computer at the following location :

With the credentials, the cli client and the CDK installed let us move to the second step about creating the architecture.

To initialize the CDK we will create a new Python project which will contain the code to create the architecture.

Run the following command to create a new CDK project:

Or if you are using VSCode you can open the project with vs code using:

To initialize the CDK project run the following command:

The command will create a new python CDK project and we will be editing it in the next step to build our stack.

After a quick look you should see a structure like this in your project:

You can activate your virtual environment using the following command :

On mac and linux : source .env/bin/activate

With the virtual environment created we can now install the dependencies :

With the project initialized we can now move to the next step where we will be creating our components.

We can now move to the stack creation step

It is basically a class that will contain the code defining our stack.

Edit the first line to import the code we need to create the following stack:

To create a container repository you can use the following command :

We can either create a vpc or use an existing vpc. To create a vpc use can add the following code the __init__ method.

You can also use an existing vpc , if that is the case for you use the following lines:

For this, you need the vpc name and the corresponding id.

With the vpc created we can attach the cluster to it . To create the cluster we can use the following code :

Let us create the role, the role will give the service permission to perform tasks.

With the execution role created we can attach policy to it to give it the permission it needs.

Here is the code we used to create the task definition ;

With the task definition created we can attach a service that will be running it.

The service uses the task definition and you can see it is attached to our created cluster.

PS: When your AWS instance is in a public subnet , you need to auto-assign public IP addresses to the containers to grant them internet access. This will help your service to download a docker image from a public repository. In that case, you can use the following code when creating the service. :

Note the assignpublicip , the security group and the VPC subnets.

As stated before we will be transferring the docker logs to our log group created in Cloudwatch.

With all the objects created let us make sure that we have all the ingredients for our stack in the following updated file.

Before creating the stack open the file app.py

Replace the line where your stack is instantiated, 4th line, with the following :

With this set; you can now create your stack. With the code created we can now run the following command to create our stack.

If everything goes well you should have your stack created. As a result, you will have a cluster, running a service that deploys a task definition, and a Cloudwatch log group created.

You can check your stack from the AWS console by navigating to the following link.

If you want, you can check this project on GitHub here.

That is all for this first part, we managed to build our ship and added the most important objects to it.

We are now ready to pack containers and deliver our content to our client.

In the second part of this series, we will learn how to convert our docker-compose file to a task definition described in this tutorial. See you then!